Peter is the Chief Instructor at the Fylde Tai Chi Association. He has studied and practised Gung Fu, including Tai Chi and Chi Gung for half a century. Since first learning Peking Tai Chi, a standardised form of Yang Tai Chi, from Miss Rose Li in the early 70s he has studied other forms with various teachers: most notably Sun Style internal arts from Master Bob Melia, his teachers, Master Lei Shi Tai and Sifu Dave Martin, a first–generation student of the late Grandmaster Sun Jian Yun. In addition to Tai Chi, he has studied Wing Chun Gung Fu and Chu Gar Hung Kuen and Chi Gung under the guidance of his brother, Master John Farrell, the senior student of Grandmaster Chu Shiu Woon.

He holds honours degrees in Health Science and Herbal Medicine. Prior to retirement, he lectured in Human Physiology and other Biosciences at Blackpool and the Fylde College,and in addition, for several years there, gave non–vocational tuition in Tai Chi. He continues to teach Tai Chi and Chi Gung for the Fylde Tai Chi Association of which he is a founding member, along with his senior student Martin Brady and other Tai Chi stalwarts.

He is author of Limitations in Current Theories of Understanding Bereavement and Grief published in Counselling Journal and Counselling Reader, and Qigong: A Scientific Perspective, published in Qi Journal.

He is co–author of Understanding Chi Kung and author of Tai Chi for You: Simple Daily Exercises for Health Maintenance; Clinical Examination  Routines, Common Signs and Symptoms and Support of Health and Wellbeing: Rational Disease Resistance.

Peter is a strong advocate for personal responsibility for health and a pro–active approachto healthcare within a robust NHS. As part of this approach, he is proud to be able to pass on experience and knowledge gained over almost half a century of study and practise, being solely the result of the kindness of his wonderful teachers. 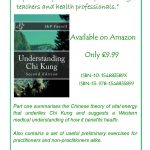 Martin is a Senior Instructor and one of the founding members of the Fylde Tai Chi Association. He has studied Tai Chi for over 15 years, in particular, the Yang Style and Sun Style Tai Chi under the guidance of Peter Farrell and Bob Melia.

He studied Wing Chun for four years under Sifus Samual Kwok in Blackpool  and Joseph Oliver in Preston.  He also practised the Filipino martial art eskrima for a couple of years under the guidance of Sifu Bob Melia.  Martin also trained the Israel martial art Krav Maga under teacher Lee Douglas, the former World Kickboxing Association light heavy weight champion.  Throughout this time, though, Tai Chi has been a constant with the other arts complementing his training.

Martin has a keen interest in Tai Chi and Qigong as a preventative health strategy. He holds an Honours degree in Medical Microbiology and a Masters degree in Industrial Biotechnology.

This website uses cookies to improve your experience while you navigate through the website. Out of these, the cookies that are categorized as necessary are stored on your browser as they are essential for the working of basic functionalities of the website. We also use third-party cookies that help us analyze and understand how you use this website. These cookies will be stored in your browser only with your consent. You also have the option to opt-out of these cookies. But opting out of some of these cookies may affect your browsing experience.
Necessary Always Enabled
Necessary cookies are absolutely essential for the website to function properly. This category only includes cookies that ensures basic functionalities and security features of the website. These cookies do not store any personal information.
Non-necessary
Any cookies that may not be particularly necessary for the website to function and is used specifically to collect user personal data via analytics, ads, other embedded contents are termed as non-necessary cookies. It is mandatory to procure user consent prior to running these cookies on your website.
SAVE & ACCEPT